Forgive me, for I have sinned

It's been 2 weeks since I have blogged.

But it's an issue and I think it's time for some honesty. The following is entirely the fault of Anne McCrossan and Chris Watson, but even I have to admit that it's been a long time coming and it's purely coincidental that two conversations from different angles collided within such a short period of time.

I'd like to think that I don't shy away from difficult subjects on this blog. Read back and there's some pretty honest stuff buried in there. And then I became a Civil Servant. And suddenly it wasn't so easy any more.

My name is Louise, I used to be considered, I think, a 'social media expert' in government circles and I am scared.

Every single time I've sat down to write a blog post, I've ended up writing a paragraph and then exiting the post, leaving it in draft to sit and fester, never to see the light of day. My Twitter presence has dwindled to occasional retweets and banal comments on my working life - the safe bits, in other words. The boring bits. The bits that couldn't possibly be misconstrued.

Take last Thursday for example. I was at an open data event at Imperial College as part of Teacamp which is an event which is not government affiliated nor officially run. It's an event run and managed by Jane O'Loughlin, requires a lot of hard work to keep going and while she is a Civil Servant, and it's run mostly for Civil Servants, it's also open to others as well. Someone from the open data community commented about circumventing private sector data storage such as Nectar Card information by asking people to voluntarily contribute the data themselves to a central gathering point.

I tweeted, in 140 about this, contributing my own little bit of observation to the #teacamp hashtag.

A day later, an old friend said it was an irresponsible attitude for government to take. My heart sank, and I immediately replied back that I had been at a non-government event, had merely been relaying someone else's idea who was not a Civil Servant and this was absolutely not government policy or attitude or opinion or anything else besides.

It's all about context. I've only got 140 to play with. If you read the rest of the #teacamp tag from last Thursday then you'd understand it was actually unlikely that that comment would have been uttered by a Civil Servant (we were in the minority at the event, I think it's fair to say). But that friend didn't and so took my comment out of context and so misinterpreted the comment.

Was it his fault for taking it out of context? Or mine for assuming a hashtag was enough context?

It scares me. It's hard. I am not going to lie - every single time I tweet these days I question what I am tweeting and whether it's breaking the Civil Service Code, the rules which I, as a Civil Servant, must abide by 24 hours a day, 7 days a week, 365 days a year.  Add to this that I am in a politically restricted post, and be impartial takes on another dimension above that laid out in the Code itself. Then there's the fact that people who may hold my future career in my hands may read what I say, that journalists do too  (some, in fact most, because I used to write and now don't and they simply haven't unfollowed me, but nevertheless are very there), that our Executive Director too follows me, and the weight that weighs every time I press tweet is not inconsiderable.

And the absolute worst thing? I was the very first person in line, not so long ago, telling people how damn easy all this was, that it was just communication, that it's not scary, just get on with it, the benefits far outweigh the risks.

Well, here's the thing. They do. They really do. I connect people on a weekly basis who can and do help each other. I do it inside government via email as much as I do visibly on Twitter. If someone wants a hand with something, if I don't know the answer, I'll know someone who does. There is nothing wrong with that. There is nothing wrong with maintaining reputation as a trusted source by pointing people at interesting articles and blog posts. There is nothing wrong in taking responsibility for my own learning, and sharing that learning with others who may benefit. There is nothing wrong, even, with talking to MP's or other Civil Servants on Twitter. What would be wrong would be allowing anyone to think they knew my political partiality (which I don't have, and never have had, as I've repeatedly mentioned in this blog) by the volume or sway of the signposting or retweets or conversations.

So it comes down to this.

Yes I should think before I tweet and before I post, in the same way I should consider responses to emails or questions face to face. Yes I should make a conscious effort not to break the Code that I am bound by. But I think that what it comes down to, for me, is that if I can justify my actions, they don't break the Code and, as happened last week, I can explain clearly and quickly if someone has incorrectly taken something out of context, I'm covered. 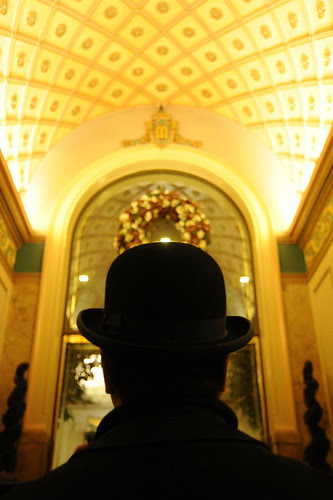 Because on the flip side of this, there is a 'thing' around people getting to see that Civil Servants are normal people. Just normal people. We read MIT review, Forbes, Boing Boing and El Reg. We disagree with some things that happen in the world, we find science fascinating, we watch in awe as David Attenborough shows us yet more of the wonders of the world, and we get stuck in snow related transport failures. Just like everyone else. We are not faceless, we are not boring, we don't wear bowler hats (well, most of us) and we have opinions.

But we also have rules and legislation which ensures you can't know some of those opinions. Never discuss religion, sex or politics, my father used to say. Words to live by, say I.