It's not grim up North

In todays Guardian Online, in the Comment is Free section, is either a) a scathing disparagement of Northern towns beginning with B, or b) someone's attempt at humour gone utterly wrong.

I work in Blackburn and live in Accrington, both towns located in an area of Northern England generally referred to as East Lancashire. Both are ex-mill towns, by which I mean to say they were towns that during the industrial revolution produced textiles and cotton and were centres of innovation and hard work (something called the Spinning Jenny was invented here which revolutionised textile production). They thrived. People came to work here. Money was here and my ancestors had some of it until they gambled it all away.

Then tech moved on, the mills closed and what was left behind was a workforce with a redundant skill set, lots of abandoned buildings and what we call 'brownfield' sites where buildings are knocked down and nothing replaces them. It's also these towns where I'm sure I remember someone trying to sell a street of terraced houses for 50p and failing. My town looks like this, in places: 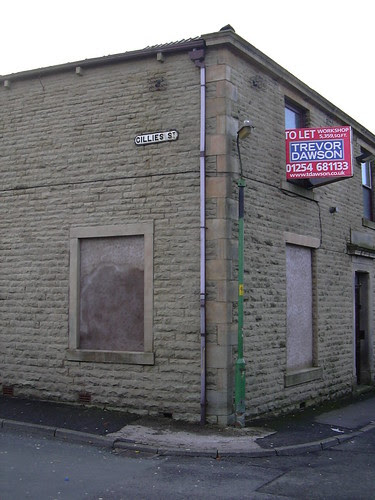 And that's the town that I think this article is talking about. But it's odd. I am an ex Londoner. If you ask me what I remember of my 7 years there, I will tell you of 7/7, of blood stained swabs left behind at bus stops as a pregnant woman who'd been stabbed in the stomach by her boyfriend was airlifted to hospital, of screams at night, endless sirens, always a drama, never a second of peace and quiet, everyone rushing madly around, no one thinking an hours commute costing over £1,000 a year as anything strange or unusual. I think of shallow bankers, coke filled nightclubs, sub cultures and scenes ruined by gangs and violence. I love London, let there be no mistake, but it is not a box of chocolates to live there and anyone who tells you it is has more money than sense or hasn't comedown long enough to notice yet.

By contrast, I tend to focus on different things to journalists based in the capital when asked about where I live. Because I live somewhere where this can happen. I live somewhere where yes, there is a massive population under 25. But there is also an older population as well, who choose to spend their time volunteering, helping, fund raising and looking after people. We have food festivals where I can buy Wild Boar which hasn't had to overnight it down to Borough Market. There's more than one place to buy venison burgers here. The Farmers Markets include soil and other such unsavoury substances. The Farm Shops sell beautiful gifts, but also offer boxed deliveries which don't take 24 hours from picking to your door - more like 2 hours. I live somewhere where cooking a proper curry isn't a mission involving 7 buses, a map and a bravery pill - I just pop down the road and buy all the ingredients in one shop.

We stood a week ago looking at a map of the United Kingdom, showing all the National Parks. In a circle around where I live are the Lake District, the Yorkshire Dales, the Peak District, Snowdonia National Park. All within 90 minutes drive outside of rush hour. Oh, did I not mention rush hour? It lasts an hour. It does what it says on the tin - just like absolutely everything else around here.

2 hours in a car and you can get to Scotland. North York Moors. Northumberland and Hadrian's Wall. If you camp, good luck ticking off every site in Cool Camping in a summer. No chance. If you love cheesy seaside, go to Southport. If you want sand dunes, and orchids (yes there are, I saw one) and wind blasting, go South of Southport. If you want a quick walk up a hill and across a moor away from everyone in the entire world, stand in the centre of one of our mill towns and walk for 30 minutes, you'll be right.

My commute to work involves horses, a peacock, some highland cows, some sheep (with requisite lambs), some other breed of cow I don't even recognise and sometimes, depending on which desk I am going to, cloud inversions down in the valleys which I am afraid tend to lead to me starting days in wide eyed wonder. I don't live in some middle class idyll here. I live in a terraced house opposite a house which looks very much like the one in the picture above but I tell you something for nothing at all. I have been tempted repeatedly to apply for better paying, better prospected jobs in London frequently over the past 6 months. And every time, I've not done so because the money simply isn't enough to tempt me away from here. Because while the backs are sometimes annoying, while our 'yard' is simply that, while the kids playing cricket opposite our houses will one day do our cars window in, while a stolen car has sheared the front of one of our cars clean away in a crash, while crime rates here are not perfect and while racial tensions are here sometimes too.....

I love it here. The sun sets and the colour of the stone glows. I can ride my mountain bike down a bridleway city boys could only dream of within 20 minutes of peddling up the hill outside my door. If I drive 50 minutes I can hack around Gisburn in all its random home grown, home baked volunteer built glory. If I want to go for a coffee I can, now, if I want free wireless while I'm sipping that coffee, I can have that too. I love the warmth and the sarky sense of humour. I love the freedom of expression but also the fact that when it comes down to it, barely anyone from our towns turned out for that EDL rally. I love that there is a sense of pride in some places, and none in others, and that's just like London and the home counties too.