All that glitters is not gold

I am as guilty of the following as any other. Or at least I have been. Assorted personal experiences and work conversations have, however, started to restrain my inner 'oooooh shiny' reaction to new technology.

Lets talk about the evolution of the web. In the beginning there were Bulletin Board Systems. You couldn't embed images, you navigated through them with key presses on your keyboard to enter menus, you needed to have a modicum of unix editor experience to not get locked into editing something and a stunning memory to remember the key presses required to get you back to a discussion you added to yesterday. No clicks. No images. Lots and lots of chat, debate, discussion and socialising.

The beginning of digital engagement, I think.

Then came IRC - in fact, here you go, I made a pretty picture: 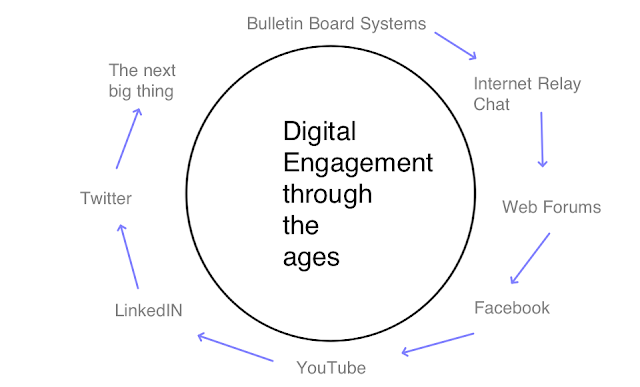 We naturally end at the other side of the spectrum - the unquenchable thirst for the next big thing. Except that's not quite the right way of putting it either. Because it's no longer about the next big thing. The evolution of digital engagement seems to have paused slightly. Held its breath. There hasn't been a successful new kid on the block for at least 6 months, a hiatus unheard of just 12 months ago.

Yes, yes, we have app.net and other shoots poking up from  the now settled soil, but increasingly I am becoming aware that in our haste to look forward we might have been missing something. 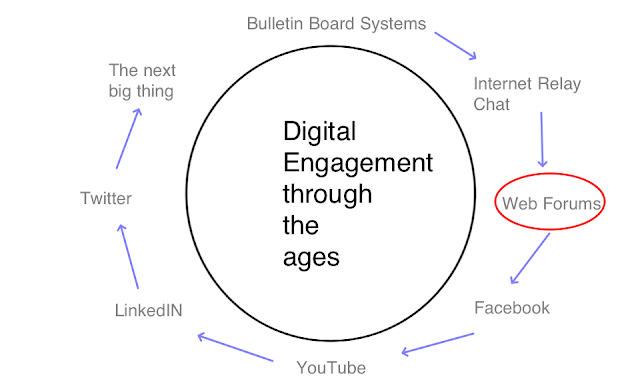 Web forums evolved during the late 90's/early 2000's. Homes for the ex BBS users who wanted a little bit more functionality, combined with incredibly niche interests (and via 4 chan, let us not ever forget that often developments in technology are pushed in the places we'd prefer not to look) these forums have persisted and stayed despite staunch challenge from Facebook and Twitter.

Except they offer something neither of those two sites offer. The ability to have a pleasant, rich, multi-user discussion thread spanning days and sometimes months, where sense is often welcomed not derided, layers and layers of rich user experience and knowledge is built and which until recently, absolutely everyone seemed to be oblivious in the social media space.

It's not social media. That's probably the first problem. Or rather, it is, of course, but there isn't one cool company behind the tool. There isn't a brand. There's just some paid for and some open source tools which people can pick up and customise until the basic product is no longer recognisable - and two forums rarely looks the same after the customisation has been applied. Because of this, I think for a long time people did not recognise that perhaps the thing driving the discussion was even called the same thing, but that each of these forums had been built from scratch with different tools.

But it's not about the tools. That's almost irrelevant. What forums are, are collection points. Think of them as locks, pauses in the passage of the thinking, learning, researching, purchasing or discussing process. They invite longer form posts than Twitter or Facebook. They see friendships and support networks develop between who have never, and possibly will never, meet. The subjects they now cover are legion and in some cases there is competition for the same audience.

What means for digital engagement people is effort. It means we have to try a bit to find the people where they are already talking (see what I did there? There's a reason that line is in the social media guidelines for UK government). It means, with some forums appearing in search engine indexing and some not that we have to be a bit imaginative sometimes in trying to ferret where these communities are. Because make no mistake, they are communities, from audio-visual forums who send around remote programmers shared between users, to the Florida community who have an item bin located in the storage area of a Florida self catering resort which users can sign  up to use, borrow the contents of for their stay and then return at the end for the next person to use - they are communities. They share, rely, comfort and assure.

And we're not even got to the medical communities yet.

Ignore them at your peril. Insist on thinking it's only mumsnet if you like. But the smart digital engagement money is in going backwards and finding the communities of persistence.
Posted by loulouk at 18:04