#pandagate. Sounds ridiculous really. 12 faces of 2011 - the women the title blazed in H1. Bottom right of the photo montage, a panda. Not, by any stretch of the imagination, a woman.

Might not have been an issue had it not followed on the heels of the Sports Personality being completely gender blind. Timing and context, my friends, your two greatest foes in social media reputation land.


This is Margaret Atwood. She's on Twitter. She wrote The Handmaids Tale which was on our GCSE syllabus. She also wrote a few other books, the most memorable to me being Cat's Eyes. Which I told her. And which she graced with a response. And so I came to have a conversation with the author of a book which had quite a profound affect on me when I was a teenager. And that conversation has stayed with me, because of the ease and naturalness with which it was conducted, considering the age of the lady it was with and the medium it was across - a medium she uses comfortably and with great effect.
Got a grandmother who's too old for this computer crap? Send her Atwood's way.


Martha Lane Fox. Apparently she's a 'figurehead'. Not supposed to be taken seriously. Not technical enough, not geeky enough. Just some of the accusations levelled. Which I think is interesting, as I can only assume it was purely accidental she built one of the first .com success stories which didn't go the way of boo.com. Evidently, it's incredibly simple to create a successful internet business, so simple we should all be able to do it. Except...no, wait...where are all these successful businesses? The lady isn't being asked to be technical, she's being asked to be digital. There is a difference, once I believe in passionately because it is, most definitely all about the people. The tech just spins the wheels and passed the packets.


Ben Hammersley. Flippantly referred to as Editor at Large at Wired (UK) magazine. Stealthily, quietly and ever so determinedly educating the important people on the merits of digital technology. I fell over the transcript of his speech to the Information Assurance Advisory Council. It is simple, powerful and true. I hear tell he's also now appointed to go do something to do with our new silicon roundabout Tech City. I anticipate great things. I assume that he will be accused of similar things to Martha. But figureheads are there for a reason, rallying calls issued by those with integrity and knowledge. In order for something to have direction and traction, it must be led. And leaders are not made.
.

Meet Cyberdoyle. Aka Chris Condor. As her Twitter bio states, she's a bit familiar with fibre and not the dietary kind. She has a reputation as a campaigner but she isn't. She's a do'er. She is part of B4rn, a social enterprise comprised of herself and a few colleagues who are going to bring super speedy connections to the tippy toppy most cornerish bit of Lancashire where it merges with Cumbria and Yorkshire. Where BT wouldn't go if you paid them, basically. They're selling shares, digging trenches and laying the fibre themselves and making a whole tonne of noise whilst they're doing it. Digital role models? Right up there as a woman just doing what she does best. JFDI.

Neelie Kroes. Vice President of the European Commission and increasingly a name I keep coming across in digital and opendata circles. Undeterred by impenetrable cross border digital rules, regulations, terminology (I'm looking at you here France) and expectations she is ploughing a straight path through the lot and organising commitments to digital single markets, interoperability and standards, trust and security, speedy connections, getting everyone skilled up, using tech to solve social problems, opendata and what seem to be a thousand and one other things too. Dutch born, but somehow...very English in her way of doing things. Her direct and determined approach is winning my utmost respect.


I may not always agree with Facebook but watching Sheryl Sandberg stand up on a TED stage and tell it exactly how it is for women in the working world was a pivotal moment for me in understanding my own mentality up to that point. Don't have an opinion, don't join in, don't contribute, don't stick your head above the parapet. Someone might notice and then what the hell will you do?
Well, you'll have a career is what will happen. One you wont put on hold or take your foot off the throttle from because you might want children (or not), or you might be sort of quite ill (or not), or.....
The magic of digital is that her words kicked my ass into touch and I'll never meet her. Chalk one up.

This could be a picture of Emer or Julie, Andrea or Gladys, Shirley or Chris, Caroline or Jane. It represents an entity without a face or with many faces. Role models and mentors on a person level who have helped and listened, talked and coached, advised and pushed, encouraged and nurtured. Because of them, variously I am; more confident, more assured, more sane, more organised, weigh less, speak more, stand taller and think more. My world has widened and my thinking speeded up - but then it has also slowed down. I have understood what it is to be professional but also what it is to be human from these women and I am grateful to know them. Some of them I call friends. And I am blessed.

This year, I have sat in meetings and spoken about digital technologies all over the Council. From leaving care to foster care, from domestic violence to young parents support, from info governance in health to community meeting co-ordination discussions. To the last I have met professionals with integrity, honesty, and an unabashed acknowledgement in some cases of their own fear of the technology. I have laughed, encouraged and been completely honest in reciprocation. And I've left every meeting smiling. Not bad for local gov. 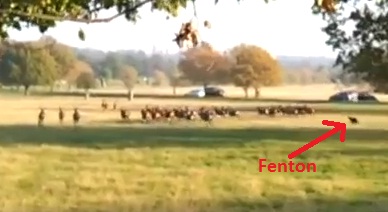 Inserted for comedic effect. But come on, far funnier than a freaking panda.