Behind every gobby woman...

I think differently. But so does my boyfriend. And we are not the same and it's not just biological or temperamental. It's literally, a different way of thinking differently.

I don't think I necessarily innovate. I come up with ideas. Some people like to call that innovating. I'm Northern, I call it looking at something, wondering why people are still doing it the slow way and then suggesting changes and helping people make them before disappearing off and leaving them to do keep an eye on the changed system themselves to make sure it's still doing what it's supposed to. Though I suppose innovating might be a shorter way of saying that.

My boyfriend is ingenious. And frankly, not enough is made of the rather unique and I happen to think amazing ability of my boyfriend to think of the ridiculous to fix something - because 9 times out of 10, it ends up not actually being ridiculous, but being fantastic. And, innovative. But it's the outcome which is innovative, not the skillset which allows him to think that way.

Take, for example, our first camping expedition. We bought an airbed from Argos. Now, never buying camping equipment from Argos ever again aside, we learnt something from the experience. We learn that when the valve stopper on the airbed is utterly useless and is letting all the air out at 4am, there is a perfectly obvious solution to the problem - to shove a maglite into the valve instead.

What, you mean you wouldn't have thought of that?

Well, neither would I. 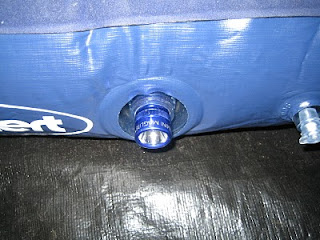 I believe ingenuity is something you're either born with or you're not. It's not something you can learn, although I believe you can train your brain a little more to look at tools, opportunities and examples around you to have a library to call on when you're in a similar situation. But the ability to think on you're feet, instantly, and draw on immediate resources to design a solution, and then implement it almost instantly is an ability which every team should have at their fingertips.
The thing is, it's a valuable commodity, and the reason for that is that there are few people who can think like this. Make, the magazine produced by O'Reilly celebrates this mentality, I think, encourages it, hones it, focuses it into something more visible. But 9 times out of 10, you wont even know that the person next to you in your team has this ability, because it's rarely called on in modern life.
Except when camping in a field. Or, as I discovered, when halfway along a 10 mile out and back route on our mountain bikes, miles away from civilisation or a mechanic, when your falling over skills lead to dented chain links and you've no spare. Or as where he works find out on a daily basis as he manages to somehow fix every server which ends up on his lab table whilst rarely needing to order new parts - he simply makes do with what he's already got left over from other projects, cannibalises it and makes do and mend.
Matthew Taylor is right. 100% right. Make do and mend is a mentality we have not needed in quite some time. We just threw it out and bought a new one rather than making any serious attempt to fix anything.
Well, this is the age of the Makers, the Fixers, the Menders. And I think my boyfriend is in for a bit of a shock as he realises his skillset that he thinks absolutely nothing of, that he doesn't even consider a skillset, is about to be one of the most sought after, not only in local government, but outside of it as well.
I'd point you at his blog at this point. But he doesn't have one. You see, he's too busy doing to be writing about it.
Posted by loulouk at 17:15